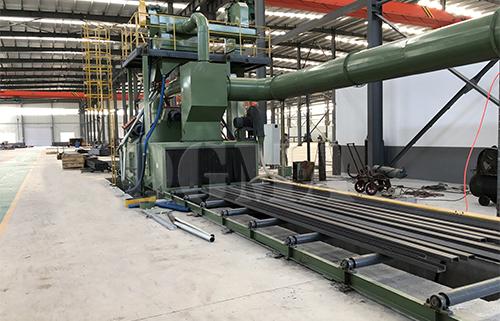 Before proceeding to the next process, almost all casting parts, sheet metal welds, steel plates, steel structural parts need to be shot blasted. This is not only can remove the surface of the workpiece rust and oxide scale, but also can make the workpiece surface form a rough surface to eliminate internal stress, increase the surface adhesion of the workpiece, prolong the service life. The surface cleaning of non-ferrous metal castings, such as aluminum alloys, copper alloys, etc., in addition to removing oxide scales and finding surface defects of the castings, the main purpose is to use a shot blasting machine to remove metal workpieces and increase the quality of the coating surface. According to the modern metal strength theory, increasing the dislocation density inside the metal is the main direction to improve the metal strength.It is proved that shot blasting is an effective method to increase dislocation structure.This is of great significance for some metals that cannot be hardened by phase transformation (such as martensite quenching, etc.) or require further strengthening on the basis of transformation hardening. Aviation, aerospace industry, automobile, agricultural machinery and other parts are required to be light, but the reliability requirements are getting higher and higher. The important technological measures are to adopt shot-peening technology to improve the strength and fatigue strength of components. 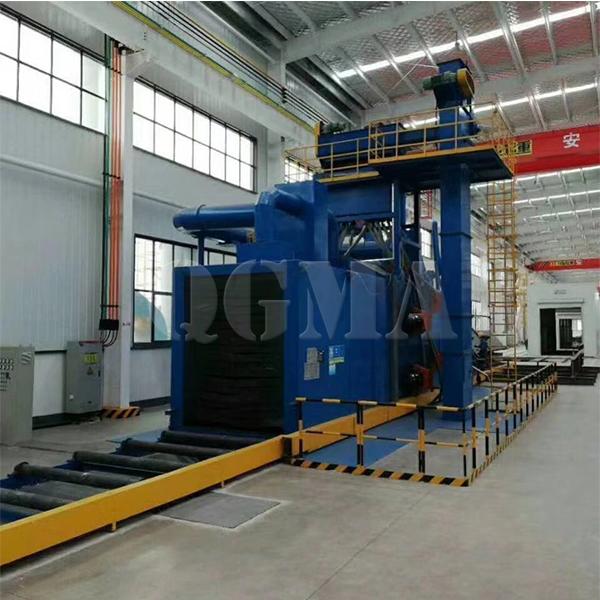 Take roller type shot blasting machine as an example: the shot blasting machine is mainly used for large I-shaped steel, H-shaped steel, steel structure parts to eliminate stress and surface rust cleaning. Shot blasting process is controlled by electrical system adjustable speed roller conveyer to send steel structures or steel to a blasting chamber mass ejection area, its around the surface hit by powerful dense projectile from different coordinates azimuth and friction. To make its scale, rust layer and its dirt falls off and obtain the smooth surface and hardness of the steel surface. It not only improve the adhesion of paint film and steel, but also can improve the inner quality of steel to extend its service life. It have loading and unloading rollers on both sides of the inlet and outlet roller table outside the blasting chamber. The steel shot and rust dust on the steel will be belowing by the belowing device, scattered down the dust mixture by the recovery screw conveying to the chamber funnel, crosswise and longitudinal screw conveyor collected in the lower part of the elevator, and then promoted to the upper part of the machine separator, separated after the pure projectile into the separator hopper recycle to use. The dust produced in the shot blasting is sent to the dust removal system by the exhaust pipe. The clean gas after purification treatment is discharged into the atmosphere. The granular dust is captured and collected into the dust removal device and then the clean air discharged into the atmosphere.

The shot blasting machine is consist of four parts:

①Blast wheel generally uses high-speed rotating impeller to projectile the steel shots in a certain direction under the action of high centrifugal force. The angle of the blast wheel can be adjusted as a certain angle. 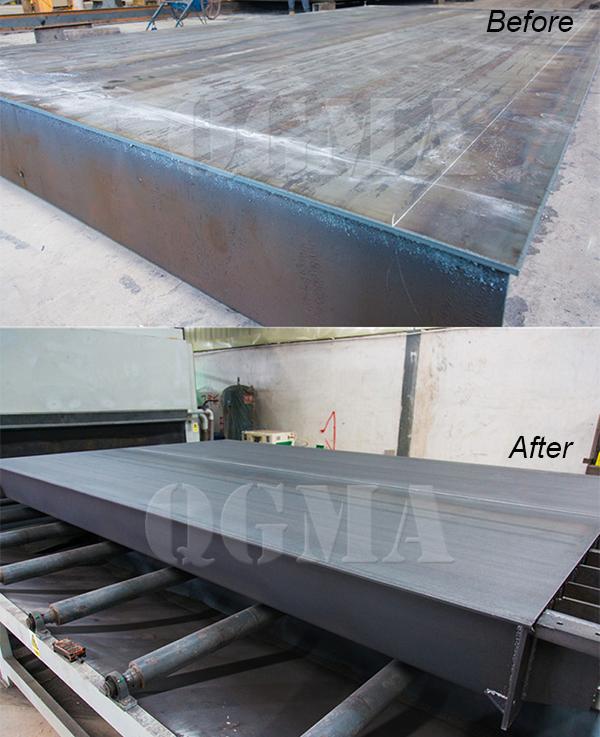 The rust removal grade of shot blasting machine is divided into four grades, which are expressed by the letter “SA”.

SA1 Light shot blasting or sandblasting derusting. Invisible grease or dirt on the steel surface, free of adhesion such as oxide scale, rust and paint coating.

SA2.5 Shot blasting or sandblasting is very thoroughly to remove rust. There should be no visible grease, dirt, scale, rust, paint coating and other attachments on the steel surface, and any residual marks should be only slight spots or strips of color. The anti-slip coefficient of the projectile indentations formed by the uniform shot blasting on the steel surface reaches 0.45 ~ 0.5

SA3 Derusting of steel by spray or projectile to give it a clean appearance. The surface of steel should be free from visible attachments such as grease, dirt, scale, rust and paint. The surface should show a uniform metallic luster.